Looking back on an exceptional weekend at the beginning of October, we’re happy and extremely thankful for the way everything turned out. All the patience and waiting were worthwhile. After a long and unwelcome break, those who experienced the autumn 2021 edition of the Concorso d’Eleganza Villa d’Este first-hand felt the positive energy that only happens at a genuinely live event. The line-up of motor cars reflected, we hope, the highest possible standards that we have always tried to maintain. It was great to see so many friends old and new.

And now we are getting ready for the next edition. The run-up to another Concorso d’Eleganza Villa d’Este has never been shorter. We invite you to gather once again in a magical location over the weekend of 20 – 22 May 2022 for a celebration of automotive elegance and excellence that remains unsurpassed throughout the world for its tradition, prestige and style.

Initial preparations are already in full swing. We’ve just opened the registration portal for you and the jewel in your collection to apply for participation in the next Concorso d’Eleganza Villa d’Este. You can access all the important information you need today by going to this Link.

Our Selecting Committee remains one of distinguished experts and enthusiasts. To start reviewing the potential entries, they would be delighted to hear from you. Most of the classes for the upcoming Concorso d’Eleganza Villa d’Este have already been defined, and we think you will find them exciting. More details below.

It’s the start of another journey. We’re counting on you being part of it – and please don’t hesitate to indulge us by sharing some beautiful memories, for example on Instagram or Facebook.

All the very best to you,
Your Concorso d’Eleganza Villa d’Este Team 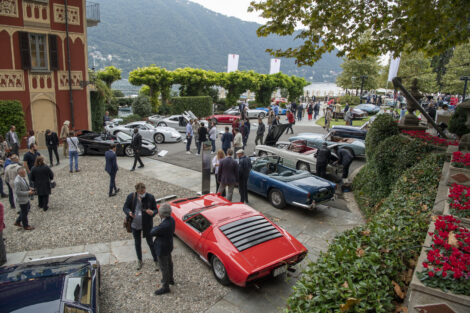 No competition for classic motor cars boasts a more illustrious tradition than the Concorso d’Eleganza Villa d’Este. For the inaugural edition in 1929, owners and creators of the finest examples of motoring ‘haute couture’ gathered on the shores of Lake Como to showcase the finest designs of the era and decide which was the most beautiful. Little has changed in the intervening decades. With such a rich history behind it, Villa d’Este is now the backdrop for a century of automotive elegance, as cars from the dawn of motoring until the modern era compete to decide which is the best of the best. Putting them into themed classes means that every year we create a fascinating story for the audience and the worldwide press to enjoy.

The Selecting Committee has already defined six classes for 2022:

Progress was fast and furious in the early years of the automobile. Pioneering manufacturers developed their first models from primitive self-propelled motorised conveyances. These were still based on experiments with carriages, carts and even bicycles. Throughout the first three decades of the 20th Century, engineering made huge leaps forward and aesthetics changed dramatically. This class starts with cars which resemble horse-drawn carriages and evolves into what we recognise as the automotive excesses of the Jazz Era.

Designers in the Art Deco era became more focused as they developed the automobile further, and they took much bolder strides in coachwork styling. Following a period when function largely dictated form, a new economic backdrop after the Wall Street crash required engineers to work within the constraints of smaller engines and lower production costs; more and more, coachbuilders developed their own ideas. The exterior surfaces of high-performance cars embraced the goals of speed and aerodynamics. As aviation, literally got off the ground, the image of travel also changed, and styling cues derived from aircraft gained prominence. This trend shaped a large number of fantastic automobiles during a brilliant decade that came to a shuddering halt with the start of the Second World War.

In 2022, we celebrate a very special anniversary at Villa d’Este: the iconic hotel welcomes guests for its 150th season. Honouring an important milestone, this one-off class of past masters will showcase cars immortalised either as Best of Show or Coppa d’Oro winners since 1929, the year of birth of the Concorso d’Eleganza Villa d’Este.

The Cavallino at 75: Eight Decades of Ferrari Represented in Eight Icons

In 1947 a small workshop near Modena built its first car, a diminutive racer named after the company’s founder, former Alfa Romeo team manager Enzo Ferrari. In tribute to this 75th anniversary, we are bringing together eight landmark Ferraris, one from each decade of the Maranello marque’s history. Each will represent the visions of its decade while contributing to the exciting continuity of this narrative. For the first time, a handful of outstanding younger models bearing the legendary Cavallino Rampante – or prancing horse – will parade across the famous mosaic on the lake at Villa d’Este.

In 2022, a brand will have the privilege of looking back on half a century in which it created a legendary history with just one letter of the alphabet: M – the briefest possible cypher for the concept of motor sport. In 1972, BMW started to modify series motor cars for motor sport. Just six years later, in 1978, the first independently developed vehicle followed in the form of the model simply named M1. The car immediately became an icon. Engines for Formula 1 followed, along with the M3, which became the most successful touring car in the history of motor sport and influenced industry as a trendsetter. Another exciting chapter was opened up by the creation of the BMW Art Cars designed by a host of famous forward-thinking artists with stunning reputations known the world over.

Breaking the Speed Barrier! The First Machines to Cross the 300kph Threshold

Speed has been a magical driving – and selling – force for many buyers and enthusiasts since the invention of the automobile. The sensation of speed was always considered synonymous with excitement, appeal and ever-lurking danger. First, the target to beat was 150kph, but far more progress was needed before designers could set their sights on the 300kph barrier. This class looks back on the fastest automobiles, and celebrates the sensation they created on race-tracks and public roads beyond their own eras.

More award classes will follow soon. If you think that your car deserves to be considered for acceptance, we’d like to hear from you. You’re welcome to use our registration portal, now available for applications. Our Selecting Committee will also be pleased to receive enquiries about automobiles that are currently outside the focus of these classes.

In addition, we are happy to inform you that the booking for Friends of the Concorso packages and Entry Tickets will be available soon.