A CLASS OF ITS OWNA. Lange & Söhne at the Concorso d’Eleganza Villa d’Este 2022

A. Lange & Söhne will once again be present when the most beautiful historic cars are shown at the Concorso d’Eleganza Villa d’Este on the grounds of the Grand Hotel on the shores of Lake Como from 20th to 22nd May 2022. Since 2012, the Saxon watch manufactory has been a partner of this prestigious classic car competition. This year, Lange CEO Wilhelm Schmid will again award this year’s winner of the “Best of Show” category with a unique timepiece. Similar to the rare gems on wheels, the one-of-a-kind 1815 CHRONOGRAPH in white gold is an expression of perfection, elegance and mechanical finesse.

A particular attraction of the Concorso d’Eleganza Villa d’Este is also the venue itself: once the summer residence of an Italian cardinal, the manor house is situated in magnificent parkland right on the banks of Lake Como. Converted into a luxury hotel in 1873, the Villa d’Este will be celebrating its 150th season in 2022. A. Lange & Söhne is also celebrating a milestone: this year marks the tenth time that the traditional Glashütte manufactory will be a partner of the Concorso d’Eleganza Villa d’Este.

At the award ceremony on Sunday 22nd May, Wilhelm Schmid will hand over a unique timepiece to the winner of the category “Best of Show”. This year, the award known since 2012 as the Como Edition will be a special edition of the 1815 CHRONOGRAPH. With a complex chronograph mechanism, the one-of-a-kind piece in white gold pays tribute to the historical link between motor sport and timekeeping.

As with every Lange watch, the 306 parts of the calibre have been finished with the greatest care by masters of their craft. The movement is also assembled twice to meet the highest of expectations. It takes nine days just to engrave the Concorso crest relief onto the solid gold hinged cuvette – a decoration which is painstakingly brought to life by hand – millimetre by millimetre. 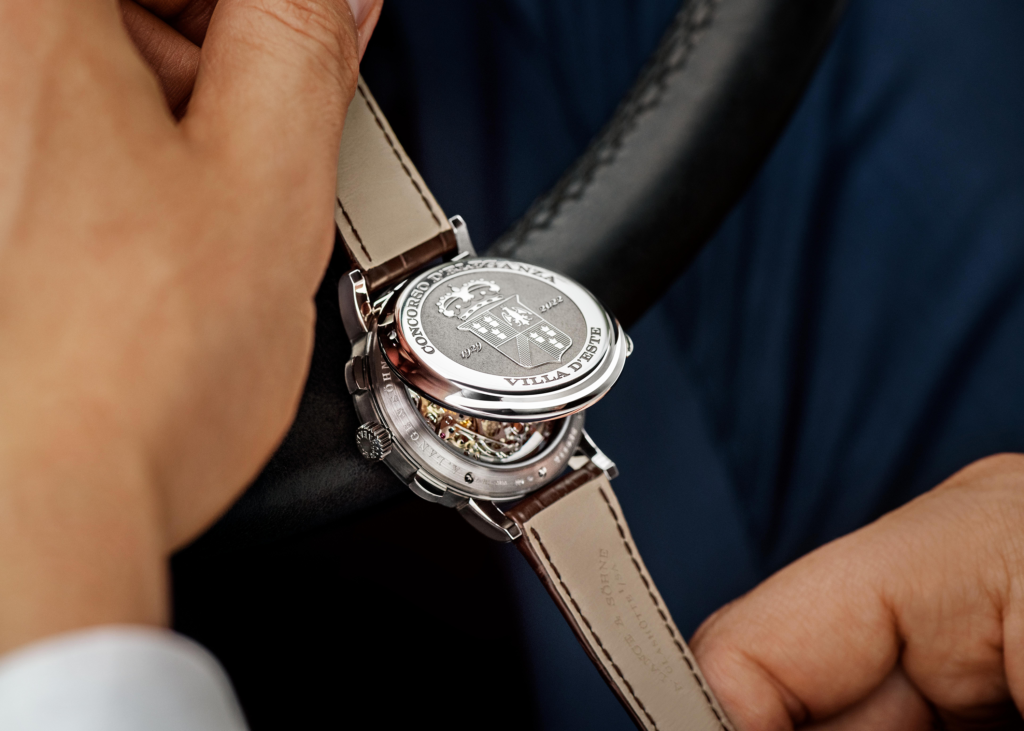 In the end, this unique piece is the result of precision, patience, and countless hours of work. In a similar way, the contestants in the Concorso d’Eleganza Villa d’Este have invested an immense amount of time in the restoration of their valuable historic cars. No expense is spared by the owners to ensure that their vehicles are restored to their full glory. The appreciation of the car owner’s commitment is therefore reflected in the special prize created by A. Lange & Söhne exclusively for the winner of the “Best of Show”.